Here’s another post about some of the plaques to be found around London. The first is on the site of the Westminster office of the Penny Post, on Gerrard Street, the first building to operate as a post office in Westminster in 1794. The London Penny Post itself was established in 1680 to deliver mail around London for, you guessed it, one penny. The Two Penny Post was established in 1801.

The next plaque denotes where the cartoonist Sir David Low used to live at No. 33 Kensington High Street. The plaque was erected in 1991 by English Heritage in remembrance of the New Zealand political cartoonist who moved to England in 1919. He made his name by satirising Hitler, Mussolini and Stalin. For this he was placed in the Black Book – the list of people that the Nazi’s intended to arrest after their planned invasion of the UK.

This next plaque, in Albion Street, Westminster, denotes where the novelist William Makepeace Thackeray lived in 1837. Most famous for his novel Vanity Fair, which was written elsewhere in London, he moved to Albion Street with his wife after spending some time studying art in Paris. 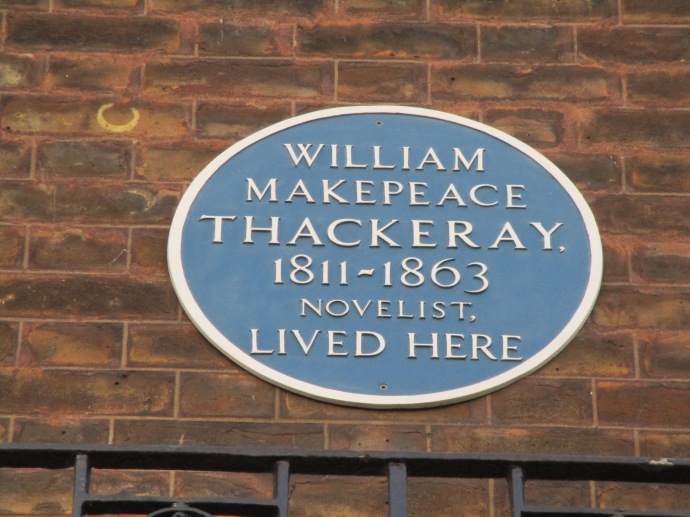 Dame Sybil Thorndike is the subject of the next plaque, found on the house where she used to live in Carlyle Square, Chelsea. An actress for over 60 years, the part of Saint Joan was written especially for her by George Bernard Shaw. Whilst living at Carlyle Square Thorndike and her husband managed the New Theatre in St Martin’s Lane.

The final plaque commemorates Sir Osbert Sitwell. He was a writer who also lived in Carlyle Square, brother to Edith and Sacheverell Sitwell. He was born in 1892 and by 1914 was fighting in the trenches in France, which is where he wrote his first play. By the 1920s he had met David Horner, his partner for most of his life. By 1963 his Parkinson’s disease was so bad he had to stop writing and he died in 1969 in Italy.