Whilst driving back from the Bo’ness and Kinneil Railway we were admiring the Forth Bridges in the distance when we came across a designated lay-by where you could stop and take photos of the bridges and managed to get the last unoccupied spot to park the car for a few minutes.

The bridges consist of the Forth Bridge, the Forth Road Bridge and the newly opened Queensferry Crossing. 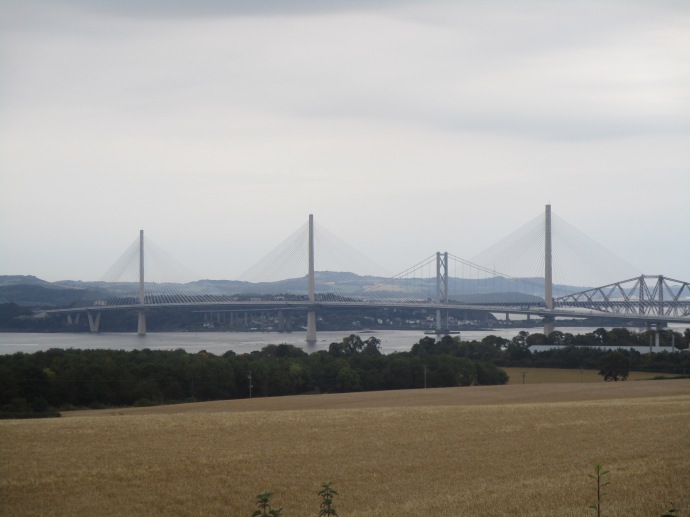 Opened in 1890 the Forth Bridge was the world’s first major steel structure. It became the sixth World Heritage Site in Scotland in 2015. It’s the one in the background pictured below.

The Forth Road Bridge was opened in 1964 and was the fourth largest in the world when it was opened. The need for a road bridge (the Forth Bridge is for trains) was first proposed in the 1920s but the Depression and the Second World War delayed matters until the 1960s. It’s the one in the foreground in the picture below – with the tower.

The Queensferry Crossing opened last year and is apparently the longest triple-tower cable-stayed bridge in the world and certainly looks very impressive. The Forth Road Bridge was starting to deteriorate and whilst safe could no longer cope with the level of traffic using it, so a new bridge was needed. The Queensferry Crossing will be a motorway while the Forth Road Bridge will be for public transport, cyclists and pedestrians.

Stunning feats of engineering I’m glad that we got the opportunity to see them clearly. More photos can be found here.