Parliament Square is just to the northwest of the Houses of Parliament, a patch of greenery notable for its statues. It was created in 1868 and redesigned again in 1950. There are eleven statues on the square, only a few of which I will showcase here. I wasn’t able to photograph them all due to the sizeable crowds of tourists taking their own photos.

All those featured in Parliament Square are relatively well known enough that they don’t need much introduction, which surely must be the case for Nelson Mandela, whose statue by Ian Walters was unveiled in 2007 by Gordon Brown, the widow of Donald Woods, an anti-apartheid campaigner and his friend Richard Attenborough.

The above statue is of Edward Smith-Stanley, 14th Earl of Derby who was prime minister three times in the 1850s and 1860s and so far the longest serving leader of the Conservative Party. It was under his premiership that the Reform Act of 1867 passed which, among other things, greatly increased the number of men who were now eligible to vote. 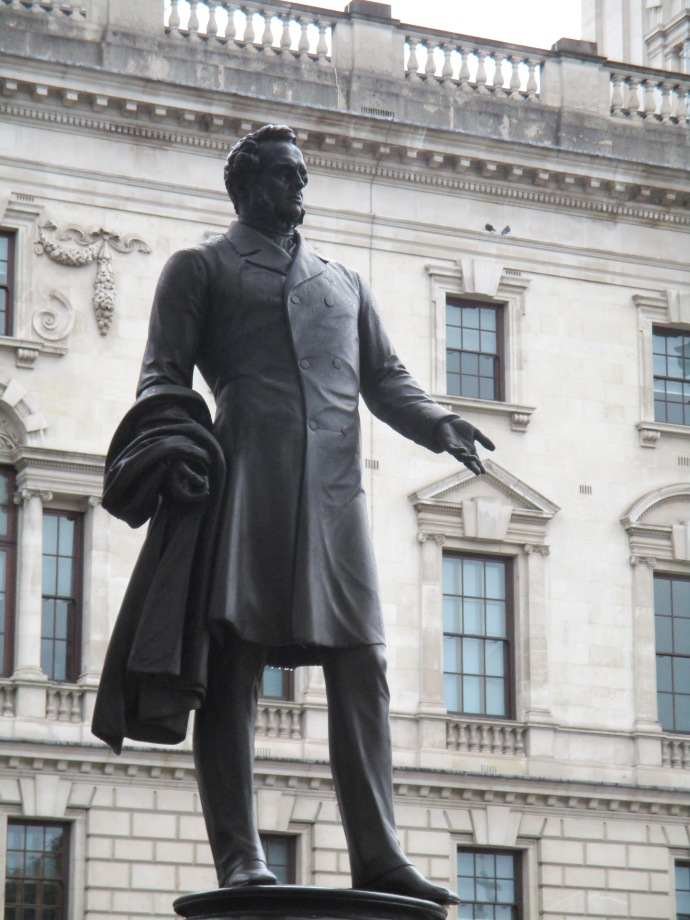 This next statue is of Viscount Palmerston, two times prime minister under Queen Victoria, who he never got on with. He was the last prime minister to have died in office – he caught a chill, developed a fever and died just shy of his 81st birthday.

The next statue, striking because of the way his coat is flapping in the wind behind him, is of David Lloyd George, prime minister during the First World War. The statue was unveiled in 2007 by Prince Charles and, being Welsh, his plinth is made from slate from Penrhyn Quarry in North Wales.

And finally for this section is Winston Churchill, who should need no explanation. Unveiled in 1973 by his widow Lady Clementine it was placed in the Square where Churchill himself had wanted it to be erected.

In 2018 a statue of Dame Millicent Fawcett, president of the National Union of Women’s Suffrage Societies and a leading campaigner for women’s suffrage is due to be unveiled in the Square. This will make her the first woman to be honoured in this way.

You can see more photos of the Square here.