A friend and I picked Leamington Spa in Warwickshire as a good day trip location roughly half-way between where we each live. Our first stop was to wander around Jephson Gardens. Around five minutes from the train station the gardens, which are named for Dr Henry Jephson who promoted the town as a spa destination, were created in 1831 and have been a popular attraction ever since.

We were really impressed with the gardens which are listed as Grade II in the English Heritage register of historic parks. The formal gardens, full of beautifully colourful flowers were definitely a highlight of our visit.

Other areas of interest included the Glasshouse which was built on the site of the original nursery which dated from the Victorian era until 1994. As well as having a range of tropical plants and trees from all over the world the building is also of a rather lovely design. 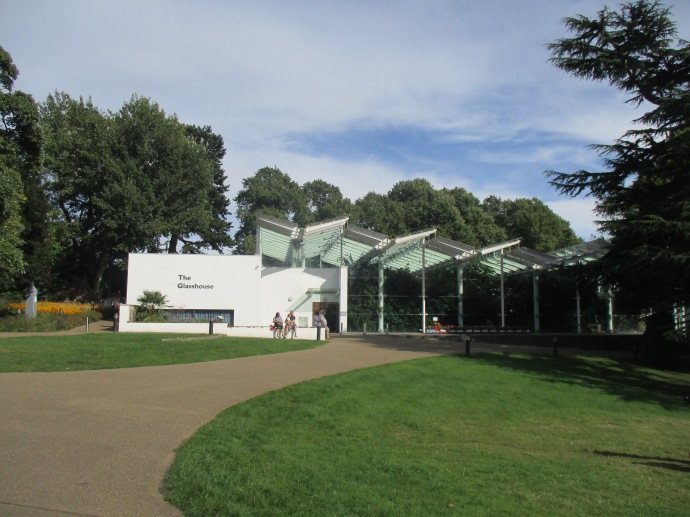 This small fountain commemorates the memory of Czechoslovakian soldiers, civilians and resistance fighters who died fighting the Nazis in the Second World War. The Czechoslovak Free Army came to Leamington Spa in 1940 after being evacuated from France and the headquarters of the Czechoslovak Brigade in Great Britain was based in what is now the Royal Spa Centre, not far from the gardens.

Another more striking fountain in the garden is the Hitchman Fountain which was erected in 1869 in the Gothic Revival Style. The fountain is named for one of the town’s philanthropists, a Dr Hitchman who gave poor labourers employment in creating the Corinthian-style temple which you can also find below.

The gardens are also next to the River Leam which can be seen closer on the very striking blue Mill Bridge, a suspension footbridge that was erected in 1903 to connect Jephson Gardens with the nearby Mill Gardens by the engineer William Louis de Normanville. There is also a memorial to de Normanville in the gardens.

A lovely feature of the town and well worth an explore. You can find more photos here.