The Albert Hall is a conference centre and concert venue next to St Barnabas Cathedral. The original building was used as a Temperance Hall which had been designed by Watson Fothergill. It was the largest concert hall in Nottingham but was largely destroyed by fire in 1906. The current building was built on the site in 1909 designed by Albert Edward Lambert designed in the style of an Edwardian Music Hall. 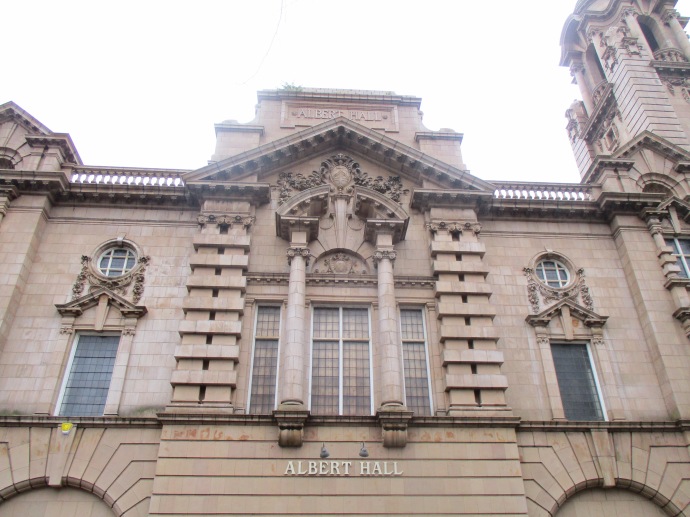 On the same day I made my visit to the cathedral I decided to try the doors of the Albert Hall as I could see the lights were on. As they were unlocked I went in and found someone who gave me permission to go in and take photographs. I have been inside before – to attend a talk by Margaret Atwood – but this gave me a better opportunity to take photographs.

The Methodists moved out of the Hall in 1985 and since 1990 it has been run by Albert Hall Nottingham Limited. A lot of notable people have appeared at the Hall including Yehudi Menuhin, The Rolling Stones, Black Sabbath, Diana, Princess of Wales and Margaret Thatcher. The Hall functions both as a venue for concerts, banquets and conferences, though the Great Hall is the best part of the building.

The highlight of the Great Hall has to be the impressive organ built by J. J. Binns and installed in the Albert Hall in 1909 and brought for the hall by Jesse Boot, of Boots the chemists fame.

It’s a really striking venue and the Great Hall is well worth a look if you get the chance. You can find more of my photos here.

Goose Fair, Nottingham. Back after a break because of COVID one of Europe's largest travelling fairs is on at the Forest Recreation Ground for an extended run this year, finishing on Sunday 9 October. Lots of new rides I didn't venture on but I did take a bunch of photos and buy some candy floss and brandy snaps.